Welp, as first LJ posts go, I could have gone better... or a whole lot worse...

Anyhoo, as a longtime fan of the Clown Prince of Crime, below is a little something I originally whipped up for

about_faces. Lately, however, our dear thespian seems to barely have the time and energy to compose his own posts, let alone guest ones. This post is thus dedicated to him, and Joker fans around the 'net. Yes, even the ones who like the Young Justice version. :P

Beneath the cut lies a collection of every incarnations of the Harlequin of Hate - that I could think of - to have ever been featured in movies or on television. Regular iterations, wannabe successors, alternate-universe... everything goes. The four corners, of course, are taken up by a very special guest to whom Mistah J could be said to owe his entire existence to.

(The video game ones are excluded, as I personally do not see much accomplishment in collecting decent screenshots of them. Full-body images of all of them, from Dark Tomorrow to the Arkham games, can be found on Google with virtually no effort. Maybe someday, I'll create a separate collage just for them. But not today.)

Can you name 'em all? 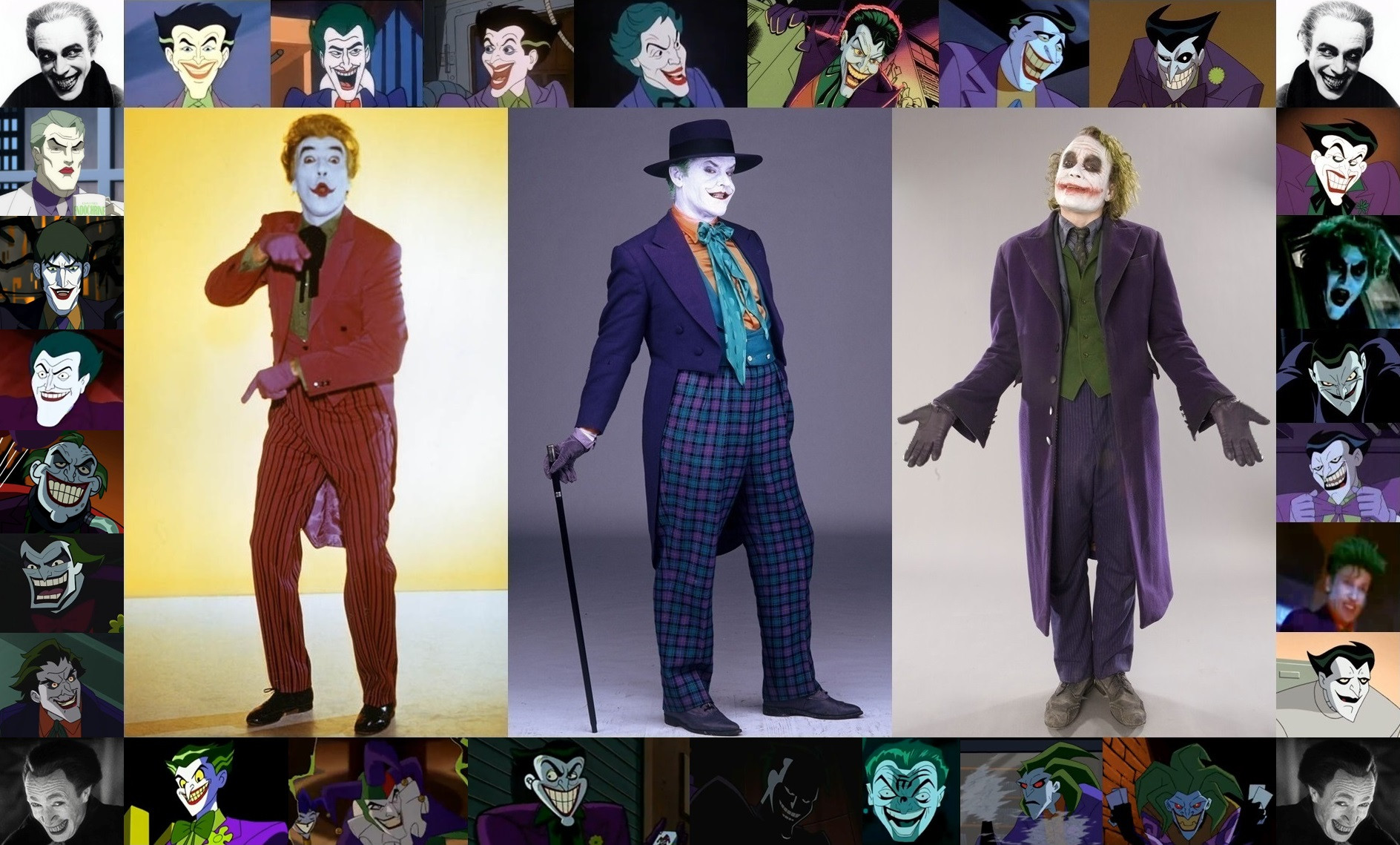 (For a larger image, right-click and select "View Image".)

Yes, I'm aware that I probably missed a few (I drew the line at including the Aardman one from the recent DC Nation shorts). Some of you might also consider my criteria a bit nitpicky and arbitrary - most other lists like these won't bother including imposters or alternate-universe takes - but what can I say? I had too much free time on my hands.

One final thing: credit where credit is due. Most of these images, I got myself. However, I could not have procured the full-body image of Romero's Joker without the help of the kind folks from the '66 Batman Board, as well as the awe-inspiring efforts of Batfriend.com. The full-body image of Nicholson's Joker, meanwhile, I begged off of skillfully procured from Reevz666 of Batman-Online.com, a wonderful place for Batman fans - especially those of the Burton films - to convene.

Thank-yous for these brave folks would be greatly appreciated.
Tags: batman, joker, too much free time
Subscribe

Well done! There are a few nitpicks I could make (I don't see "The Batman/Superman Hour" or "Static Shock" anywhere in there, when I specifically procured screenshots from both) but it's probably the most complete answer I'm going to get.

As for your prize... see below.

Oh, right, the picture of him adjusting his bowtie is from Static Shock, hence why the colours look off - they're from a painted cel.
Still, I was able to identify a On-Star commercial, for goodness' sakes, so I don't feel too bad.

I had several potential prizes in mind. I'll just put this one out here, and save the others as backup in case you've already gotten to it (which is not unlikely).

The works of Adrian Tullberg:

Adrian is, bar none, my favorite fanfiction author thus far. He rarely writes much in-depth, with most of his pieces being short little one-shots, but there is something distinctively sleek and captivating about his laconic style and strict segregation of dialogue and action. Who knows - maybe you might find some problems with his characterization or his politics, but me, I'm a shallow, shallow man when it comes to these things.

For particular recommendations, I'd suggest "Greatness" (originally created in response to a thread I'd made on the CBR boards), "Probationary Member" (one of his longest works, and packs quite a punch in the gut), and "An Unusual Mission" (probably his most famous work, and often treated as Ground Zero for the Batman X Wonder Woman following).

There's an Aardman Joker? As in, stop-motion? Ye gods, the mind boggles! Where is this creature?

I sat through the first short once, and have no intention of going back ever again. Aardman!Joker looks more like Krusty the Clown, and sounds nothing like either character.

OK, found it.
I have to say, given that the intention of the short is clearly more of an evocation of 'Creature Comforts' than anything approaching realism, I venture to state that you may be overreacting just a trifle. I mean, yes, that Joker is nothing whatsoever like the 'real' Joker, but neither are any of the other characters; the contrast between what we expect of them and how they look, sound and act is part of the humor. It kind of reminds me of the 'Little Batman' webcomics that were floating around a while back; you know, the ones that had him gleefully shouting out 'I'm the Gosh-Darn Batman!', then giggling like he'd just said something really naughty.

Eh. At least Nguyen's characters look vaguely like the Bat-cast I know and love.

I suppose that it boils down to the fact that I have little love for the Aardman style, or claymation in general. I find it kinda gross to even look at, and - rightly or wrongly - I have a knee-jerk tendency to associate anything that even resembles Aardman with toilet and body-part humor.

I guess that's the clincher, yeah. Myself, I really like Aardman - I think the Wallace and Gromit shorts/films are classics, and I greatly enjoyed both 'Chicken Run' and 'Flushed Away'. (I also like claymation, so - yeah.)
I confess, I don't really know what you mean about 'toilet and body part humor' - there was a bit in some of the latter 'Pib and Pog' shorts, but otherwise, very little that I can think of.